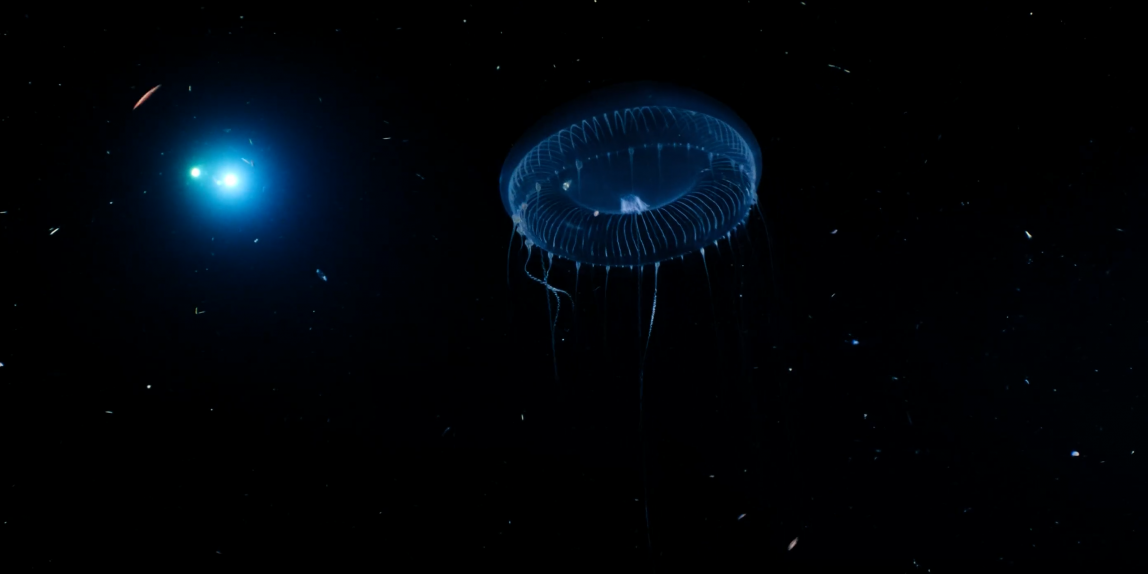 I used a Nauticam Wet Wide Lens,  two 9,000-lumen Keldan lights, and the dual native ISO of the Gh5s, and I actually managed to pull together a video!

Blackwater is a unique type of diving that is popular in areas with large natural currents. It continues to grow in popularity all over the world but has really become a hit in Southeast Florida due to our proximity to the Gulfstream.

Here in Florida we drop a string of weighted lights into the water and let all of the divers drift along in the current with it. While the pelagic critters of the deep come up naturally to feed on the phytoplankton near the surface, many are also attracted to these lights and begin to drift towards them. This is when the magic begins.

While blackwater photography has been popular for quite some time now, there really hasn’t been much buzz about blackwater video. I decided to try my hand at it for the first time on a dive with the South Florida Underwater Photography Society, a local photo club I am involved in.

We ran the trip through Pura Vida Divers, one of the club’s sponsors, and a pioneer in operating blackwater dives in SE Florida. On this boat were some of the biggest names in blackwater diving, we’re talking published blackwater photographers here, and luckily there was even one diehard blackwater videographer as well, my friend and fellow club member Jim Mears.  Jim happily chatted with me beforehand and talked about the different focal lengths and light configurations he used which consisted of an older version of my camera and 4 separate lights and got me thinking about how I was to position my 2 Keldan lights to properly illuminate these critters.

The dive requires everyone to carry at least two lights and many of the photographers have more.

As a videographer, I love light and tend to incorporate it into my shots whenever I can. The documentarian inside of me knew there was no way to accurately portray this kind of diving without having some of the other photographer’s lights in my compositions and when I saw the big string of lights I knew I had to use it. While I enjoy lights in front of my lens I know that many photographers do not. I tried to be respectful of this during my dive and move my lights away from them quickly, video lights can be extremely bright and should always be used thoughtfully.

Speaking of lights, I definitely had enough lumens to enjoy filming the dive, and I certainly would not have wanted any fewer. The typical trick with any sort of video lights is to position them so that they are illuminating your subject more than any other particulate in the water column. For blackwater, it’s pretty easy to tell when the subject is illuminated because it begins to glow bright, almost metallic colors and the camera picks it up fabulously. It is not easy, however, to only illuminate your subject when there is so much particulate in the water.

Now for the Settings

The Panasonic GH5s’s High Native ISO is pretty impressive. This is a function that allows the high native ISO of 800 to essentially operate the same as it’s low native ISO, 100. Once in my high native ISO setting, I sat pretty comfortably between 1600 and 6400. I really didn’t notice too much noise in post until I really pushed the camera to the second-highest ISO of 25600.

I used my Nauticam WWL-1 in conjunction with my Panasonic 14-42 Power OIS lens on this dive which is a bit of an unusual choice for blackwater, but it performed really well. I typically shoot around f/8 during my daytime dives and I continued to keep that as my ballpark for blackwater. While it isn’t a dealbreaker, the optic is not as sharp when it’s shot wide open (which is typical for almost every lens underwater anyways).

What is really impressive about this lens is that the reproduction ratio also works for you once fully zoomed in and is incredibly sharp so I was able to film some teeny critters and still get useable stuff. I was limited in what I could fill the frame with, but there was sometimes so much movement that the smallness of the creature could be easily overlooked.

You can focus right up to the glass on the WWL-1 but some of the critters wanted to be right on my dome where I couldn’t really shine my lights without causing flare. If I had a focus light that hit the area right in front of my dome then I probably would have been able to achieve minimum focus a little more frequently.

Focusing was a challenge, but that was to be expected. I don’t have the ability for manual focus at this time but it would certainly help. What I end up doing is locking my focus and moving with the critter, it’s not easy so I was more lenient on myself in the editing room my first time out.

The reason I was able to pull together a video my first time out is largely due to how well I know my gear. This specific type of photography and videography is very different from anything else but, I would say that nighttime macro filming prepared me well for what to expect. Of course, nothing will improve blackwater skills better than more blackwater diving.

I would also recommend chatting with the people on your charter. The wealth of knowledge available from the people aboard these boats multiple times a week is incredible, and I can see why they dedicate their evenings to this. Photographing, filming, and the idea of possibly discovering these creatures is intoxicating, and I have certainly begun the descent down the blackwater rabbit hole.